The export grew by 9% and the import increased by 12.2% on an annual basis for the first two months of 2017

Bulgaria’s trade with the European Union has accelerated at the beginning of the year, shows the preliminary data from the National Statistical Institute (NSI).

In January and February, the country’s export to the EU increased by 9% compared to the same period in 2016 and reached 4.957 billion BGN Levs.

The import from the EU increased by 12.2% on an annual basis and amounted to 5.461 billion BGN Levs at CIF prices.

Bulgaria’s main trading partners in the export are Germany, Italy, Romania, Greece, France and Belgium, which account for 67.3% of the export to EU member states.

In February the export to the EU increased by 10.7% compared to the same month of the previous year and it amounted to 2.531 billion BGN Levs. 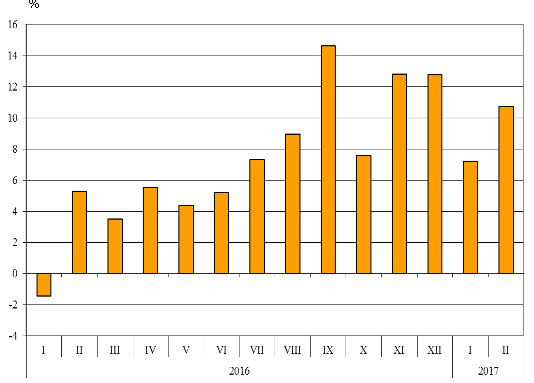 In Bulgaria’s exports to the European Union in the first two months of the year, the largest growth was recorded in the sectors “Mineral fuels, oils and similar products” (45.7%) and “Items, classified mainly according to the type of material” compared to the same period of the previous year (28.5%).
The largest decline was recorded in the raw materials sector, inedible goods (excluding fuels) (10.2%).

In the import from the EU in January and February, compared to the same period last year, the largest percentage increase was recorded in the sectors “Mineral fuels, oils and related products” (98%) and the largest decrease was recorded in “Non-alcoholic and alcoholic beverages and tobacco” (10.8%).
The foreign trade balance (export FOB – import CIF) of Bulgaria and the EU for the period January – February 2017 was negative and amounted to 504 million BGN Levs.

Export, import and trade balance of Bulgaria in the period January-February 2016 1 and 2017 1 in months

1 Preliminary data to 9.05.2017.
2 According to the data of The Bulgarian National Bank (BNB) for the transport costs.

At prices FOB / FOB (after elimination of transport and insurance costs on the import of goods) the balance is also negative and it amounts to 233.5 million BGN Levs.