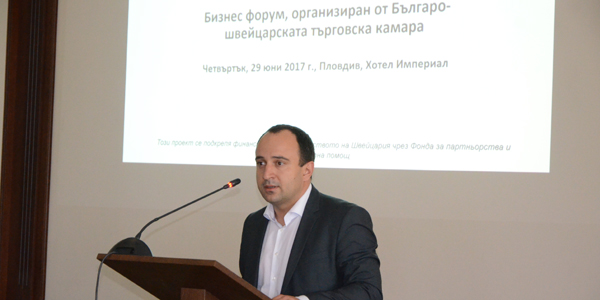 The Bulgarian-Swiss Chamber of Commerce organized a Business Forum “Building Partnerships with Swiss Companies”, which took place on 29.06.2017, in Imperial Hotel, Plovdiv. A special guest of the event was the Ambassador of the Swiss Confederation in Bulgaria, HE. Denis Knobel. During the forum, along with the good practices in the business contacts between Bulgarian and Swiss companies, the progress in the introduction of dual education in Bulgaria under Swiss model was also discussed.

“In recent years, Plovdiv has become an industrial leader in the country, Trakia Economic Zone is one of the major production zones in Southeastern Europe, and hundreds of companies have developed and expanded their production by entering the local market. IT and outsourcing industries are in the focus of economic growth, there are more than 6000 employees in over 40 companies in the sector, which makes Plovdiv a second IT destination, “said the Deputy Mayor Stefan Stoyanov at the opening of the business forum.

According to HE. Denis Knobel, “Plovdiv is an important business center, the economic heart of the region”. The region of Plovdiv is one of the good examples of industrial production and fast and dynamic development of the business as a whole, and Bulgaria is an interesting destination because it is part of the European market and has good logistics.

“The production is one-third of the local economy and has grown rapidly over the last few years. Machinery construction and the automotive industry are sectors that are expanding extremely dynamically and we already have 60 companies that produce auto parts for the whole world, “said Stoyanov.

During the meeting an emphasis was put on the project DOMINO – Swiss support for the implementation of the principles of dual education in the Bulgarian education system, which is implementing from 2015. Until now, at national level, they participate 16 schools in 11 cities, more than 50 companies and 400 students distributed in the following professions: Machines and systems with digital program management, Technician-technologies in the milk and milk products industry, Electrical engineer, Gas technician and Chef, and for the 2017/2018 school year are additionally provided Automotive technician, Industrial electronics and Electrical engineering and Furniture manufacturing.

In this respect, the Deputy Mayor Stefan Stoyanov said that the challenges faced by Plovdiv Municipality are related to attracting more and more qualified staff. He pointed out that even more companies are supporting the education system, since last year there were two dual classes in the city, and it is expected at least six new to start from September. Therefore, we work closely with the business to ensure that the education is practically oriented.

Representatives of the companies, the DOMINO project team, companies included in the partner platform of the Bulgarian-Swiss Chamber of Commerce, as well as other interested Bulgarian enterprises and vocational high schools took part in the business forum.