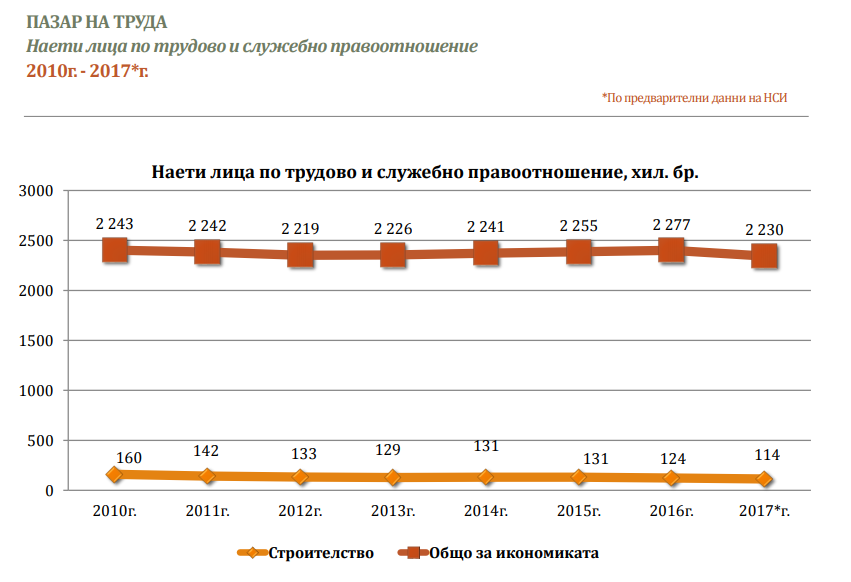 The trend in the sector is to increase employment and reduce unemployment, shows the annual analysis of The Bulgarian Construction Chamber

Construction projects, totaling 12.9 billion BGN Levs were executed in the construction sector in 2017, which indicates that the output in construction sector increased by 11.7%, compared to 2016. However, it remained below the level of 17,8 billion BGN levs, reached in 2015 when the previous programming period of the European Union funds was completed. This becomes clear from the annual analysis of The Bulgarian Construction Chamber, published on its website.

By March 2018, the construction companies in Bulgaria were 4956, of which 4913 Bulgarian and 43 foreign, as seen in the report. 98.3% of them are small companies, with net sales revenue, or assets value by 2016 up to 19.5 million BGN Levs. The medium sized companies, with net revenues, or value of the assets up to 97.5 million BGN Levs are 79 and the big companies, with revenues, or value of assets above that amount are only five, according to the Chamber’s data, based on the Central Professional Register of Constructors.

Last year, the construction of buildings continued to drive overall construction output and the infrastructure construction growth slightly slowed. The trend in the sector, as a whole, is to increase the employment and reduce the unemployment, is said in The Bulgarian Construction Chamber report.

The Bulgarian Construction Chamber noted that the residential and industrial segment will remain the most active in the next few years.

In 2017, the construction of 6764 new buildings with a total area of about 4 million square meters was started, of which 3681 are residential buildings with 14 684 dwellings, 84 administrative and office buildings and 2999 other buildings.

Last year in Sofia was started the construction of 10 new office and administrative buildings, as well as 7 in Stara Zagora and 6 in Plovdiv.

In 2017, the construction of villas and houses increased and housing blocks / mansions and mixed-type buildings can be seen a decrease, The Bulgarian Construction Chamber noted.

The newly built residential buildings put in operation in 2017 are 2 212 with 8 391 dwellings in them and a total built-up area of 732 698 square meters. Compared to the newly built residential buildings put into operation in 2016, there is an increase by 2,4%, but at the same time, the dwellings in them decreased by 10.2% and also the total built-up area by 6.7%.

The trend in these areas compared to the previous year is for increase of the number of dwellings put in operation, the biggest in Sofia region – 23.3%, followed by Varna region with a growth of 6.9%, Plovdiv and Burgas respectively with 3.8% and 2.8% growth on an annual basis.

Unemployment is decreasing, wages are rising

Construction workers, occupied in the sector increased by 0.1% last year and the unemployed in the sector decreased by 33.1%, according to the data of the Chamber. The labor costs for employers in 2017 reach 1.2 billion BGN Levs, which is a growth of 3.5%, compared to 2016. The average annual salary in the sector last year was 9857 BGN Levs and it grew up by 6.1% on an annual basis.

According to the data of the Public Procurement Agency, the contracts, signed in the construction sector in 2017 are 2764, with a total estimated value of 2.5 million BGN Levs. The energy infrastructure retains its position as a leading sector with the highest number of contracts, signed and afterwards are the engineering infrastructure, the dwellings and the water-supply construction.

In the amount of the contracts, the engineering infrastructure takes the lead, overtaking the energy infrastructure. After them, the construction of dwellings and water-supply constructions remain in the same positions.

We expect two or more new investment projects in Plovdiv as a follow-up from the business forum in Istanbul, says Deputy Mayor Stefan Stoyanov

Plovdiv Deputy Mayor Stefan Stoyanov expects two or more investment projects to follow up on a Bulgarian Investment Forum in Istanbul on January 26, 2023.

Invest Plovdiv with a strong start in 2023

Bulgaria is gaining serious investment interest from its neighbour Turkey. This became evident from the International Business and Economic Forum organized by the InvestBulgaria Agency