A Chinese company will assemble electric trucks in Bulgaria 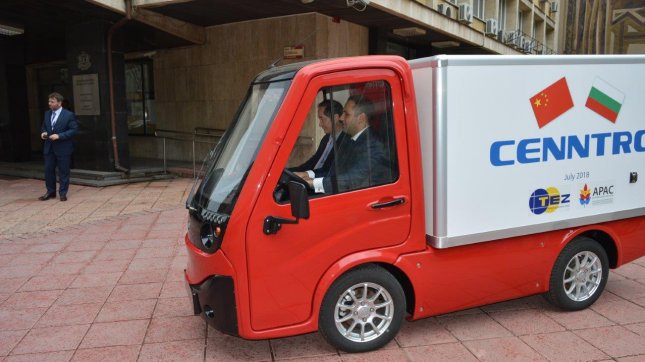 A Chinese company with its partners from Luxembourg and Bulgaria will start to assemble mini electric trucks in “Trakia Economic Zone” (TEZ) near Plovdiv.

“We expect the first truck to be ready in 6 months,” said Peter Wang, CEO of “Centro Automotive Group”, during a meeting with the Economy Minister Mr. Emil Karanikolov.

In the next 3 years, the company plans to invest about €10 million in the venture. “We would like this plant to become a center for Central Europe – not only for assembling, but also for production of the separate parts as well as for maintenance. This is our goal”, Mr. Wang said.

For his part, Minister Karanikolov assured the Chinese entrepreneur that the goverment supports and fully cooperates with investors who create a product with a high added value.

About 150 people will be hired in the new plant, it became clear during the meeting. The good education of the workers is one of the main reasons the company deciced to make an investment in Bulgaria. The cost of assembling and placing the electromobiles on the market is also quite attractive to the investors”, said Mr. Gilbert Jost, Chairman of Luxembourg’s “Sevik Immobility”, a partner of the Chinese manufacturer.

A survey has already been carried out among several Bulgarian shipping companies that have shown interest in acquiring this type of transport. “The trucks will not have to be bought”, Mr. Jost emphasized. He explained that “the vehicle itself is not important – the technology behind it is important – the applications, the mobile communication, the overall maintenance of the truck. In Europe we do not actually sell trucks – we sell solutions, a logistic concept.”

It is the technology and maintenance of the trucks that are the main part of the services that the company offers. The idea is new to our market, which makes the Bulgarian partner of Centro – Eng. Plamen Panchev, convinced that it will be successful.

According to the Chairman of the board of directors of “Sienit Holding” and the founder of TEZ, the fact that the client should not make this investment initially is a huge facilitation. But, no one will be refused if he wants to buy the mini electric truck.

After the meeting, the Economy Minister Mr. Emil Karanikolov drove to the car park in front of the ministry the “Metro” – the prototype of the truck. “This is actually a multifunctional platform, because besides transporting goods up to 500 kg, it can also be equipped with a refrigerator compartment for the transport of frozen food. The truck can be charged directly from the grid, no special station is needed”, explained Mr. Wang, as he went for a drive.