Industry 4.0: The key is sharing ideas between the companies and working with data 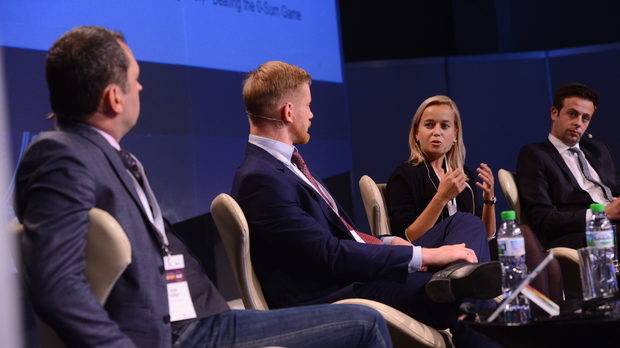 The business must be prepared for a revolution, not for changes, consider the participants of the conference

The changes in the industry will have an impact in every area of the ​​business. Many companies will not manage to adapt as they will approach to it as changes, not as a revolution. This is what Maciej Bazyl, Management consultant in A. T. Kearney commented, during a conference, organized by “Capital” and Plovdiv Municipality in the panel “The future of the industry”. The formula is to cope with the culture of your company. This means each unit of the company to decide how it can benefit from the new technologies. “The digital technologies have two levels of perception: the first one is how we can do things we do better. The second one is the realization that we can do new things with them,” he said. But to do this, something else is needed. “If you give the people opportunity to innovate, they will most likely focus on what they are doing, in order to improve it. But attracting of startup companies will help you find quite new applications,” he specified.

Quite important is the participation of the company manager in the process, says Natalia Corobco, Country Business Development Manager in Google. “The digitalization and innovation are not a side project. Nothing can evolve unless the leader is a pioneer in it”, she said. Digitization, however, is not everything, it is important to place the customer at the center. “The digital projects are just one of the building blocks. The others are the innovations in business models,” said Corobco.

The people and their creative power are most important to competitiveness, said Kadir Sener, Director “Cloud technologies and solutions for Multi-country Europe”, Microsoft. “It depends on us, people, to think creatively and to make systems that shake the system”, he added.

One of the sad truths about Bulgarian companies is that they do not cooperate, according to the opinion of Philip Genov, First Vice President of Unicredit Bulbank. “This is not a game where only one wins. If you find a way to cooperate, you will surely overcome the challenges of 4.0, which you will not be able to handle by yourself”, he specified.

An example of such a partnership was given in Basel about the companies in Germany. “They cooperate at the level of new ideas in order to compete with other countries. When they find something, they share it with other companies and they do not remain closed”, he explained.

An advantage of Bulgarian companies is that they are not closed, says Corobco. “Everybody we meet is traveling a lot, learning from the others and open to cooperation,” she said. According to her, the business in Bulgaria is not limited within the country, but it is thinking globally. “The digitization is a great tool in this respect”, she added.

“The possibility is to democratize, where possible, new technology solutions, such as the cloud technologies, so that they will be accessible to every company and every person. This will be a big change”, said Sener. According to his words a problem in the region is a lack of capital and that is exactly the role of companies with platforms such as Google and Microsoft. “Our role is to help you in this journey”, he said.

The Currency of the future

The data is the only currency, the most important thing for any company, according to Sener. “In the past, it was very important how much cost the workforce or the materials. Today we have to ask ourselves how much the data costs”, he said. The key, however, is that all information is unified so that it can give a real idea. That is why the future belongs to the big data (large data sets).