Bulgaria has the potential to become the Silicon Valley not only on the Balkans, but also in Europe

One of the most successful bulgarians in the Silicon Valley – Bogomil Balkanski, Vice President at Google, talks to Economy.bg

Bogomil Balkanski is one of the most successful bulgarians in the Silicon Valley. From the end of 2015, he is vice president of Google, after the technology giant acquires the startup bebop, where Balkanski holds a key position. Previously the bulgarian has made a remarkable career in VMware, where he reaches the position of Senior Vice President. He has also worked in the software company Siebel Systems, as well as in the startup company CrossWeave. He has a Bachelor degree of Mathematics from Cornell University and a Master degree of Business Administration from Stanford. Balkanski is in Bulgaria at the invitation of the Bulgarian Entrepreneurship Center, which organizes a series of events in the country with mentors from the Silicon Valley.

Economy.bg contacted Balkanski to tell us more about his path to the Silicon Valley, how to break through there and about Bulgaria’s potential for development in the entrepreneurial environment.

Bogomil, how long was your path from Stara Zagora to the Silicon Valley? Which were the main stumbling stones on it?

When I was in the 7th grade in Stara Zagora, I decided to apply at the National School of Ancient Languages ​​and Cultures in Sofia. The moving from Stara Zagora to Sofia at the age of 14 was perhaps one of the toughest steps I have ever taken in my life. But then, in the classic High School, I received the most amazing education one could dream of. Then, when I decided to apply at universities in America, relocating from Sofia to the United States was easier because I had the experience of leaving home, family and friends and orienting in a new environment. What made my degree in the United States possible is the fact that I received a full scholarship from Cornell University, where I graduated mathematics. Even at the university, I had never imagined working in the technological industry and frankly I have not heard of the Silicon Valley. So, I had to wait five more years after graduating from Cornell and going to Stanford University, the epicenter of the Silicon Valley. I was in Stanford from 1998 to 2000 – the tip of the Internet wave. And, apparently I could not resist the magnetic attraction of the Silicon Valley. 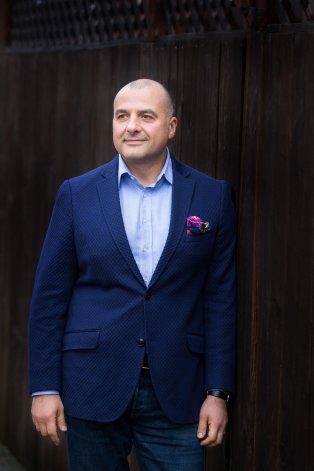 They often identify you as the most successful bulgarian in the Silicon Valley. What are the most important qualities to break through?

Ha ha, I do not know if I’m the most successful bulgarian in the Silicon Valley, but I’m probably one of the oldest. Perhaps, the most important qualities to break through, not only Silicon Valley, but also everywhere are hard-working and perseverance. Hard-working, because success is not easy to achieve, and even behind such endeavors that seem to have been successful in a single day, usually stood hard work for many years; perseverance, because the innovative ideas are not usually perceived very quickly and if one has an innovative idea, he has to believe in himself and be ready to persuade other people that the idea can be a wonderful endeavor.

You’ve been working in big global companies, but you’ve been also a part of startups. What are the biggest advantages and disadvantages of the work in one and the other case?

The big companies have developed infrastructure and processes, a well-known brand, which allows new products to enter the market quickly and extensively. But in return, in all major companies, at some point, there comes a certain amount of bureaucracy and rigidity. The greatest challenge for the big companies is precisely this – to fight with sclerosing of corporate culture.

In the small companies there is no infrastructure, no processes, no one has heard of you, which means you have to roll up your sleeves and rely only on your own abilities. In the small businesses it is required much more ingenuity. And very often, besides doing your direct job, you have to do also other things: I’ve been looking for an office, dealing with accounting, and so on. But, there is no other more satisfying feeling than building a new product and a new company.

You are now part of Google. What do you answer for there?

In Google, I continue the mission of bebop – the small company I was working on and that was bought by Google at the end of 2015. We have not yet publicly announced what is dealing with  bebop.

Does Bulgaria have the potential to become the Silicon Valley in the Balkans?

In my opinion, Bulgaria has a great potential to become Silicon Valley not only in the Balkans, but also in Europe. The ecosystem of technology companies here is developing very quickly, and over the past few years I have seen more and more young people looking towards the technology industry. They dream not just to be employees in a big company but to start their own business. In addition, other necessary preconditions for the ecosystem are already developing, such as the availability of start-up capital in the form of venture capital funds such as LAUNCHub and ELEVEN. We already have experienced people who have proven their success in the tech industry and who are now big supporters of the “Sofia Valley”.

What advice would you give to the startup companies in our country – to develop here or to seek success abroad?

For startups in Bulgaria there is no realistic path, but to look for customers and sales outside Bulgaria. The Bulgarian market is small, so in order for a company to grow, it should relatively early step on the international markets.

Your recipe for success?

Entrepreneurship has no textbooks, no recipes. Every situation, every company is strictly individual. One must always learn from the experience of the others, but at the same time has to think deeply whether the examples and the experience of the others are applicable. And the most important thing is not to be afraid of to be first – to do things that no one else has ever done before.

PrevPreviousBulgaria is in the first place in EU as female entrepreneurs, occupied in the ICT sector
NextThe new construction in the major cities of the country will continue to accelerateNext
Facebook Linkedin