We open after 16 centuries

We open after 16 centuries

When the construction of the central Plovdiv boulevard “Princess Maria Louisa” was in full swing in 1982, archeological remains were discovered under the route. In Plovdiv this is common – the city is one of the oldest in Europe and under each building there is a testamentary piece of the past. However, these remains turned out to be of both huge scale and significance. Now, 39 years later, a large building is preserving a mosaic of over 16 centuries.

Here was the Episcopal Basilica of Philippopolis, which is probably the largest early Christian church in Bulgaria. With its over 2000 square meters of mosaic, the monument is visually captivating, but it has another meaning. It is based on perhaps the most successful example of a large public-private partnership, in this case – between the America for Bulgaria Foundation, the Municipality of Plovdiv and the Ministry of Culture, as well as dozens of other organizations and experts. The total investment of the foundation and the municipality is over BGN 20 million. The site is on the indicative list of UNESCO and will fight to be internationally recognized. In addition, the basilica will not remain static. On Sunday, April 18, this two-storey cultural center will be officially opened to visitors, but work on it continues – specialists will work on site to not only maintain it, but also to learn more about its history. 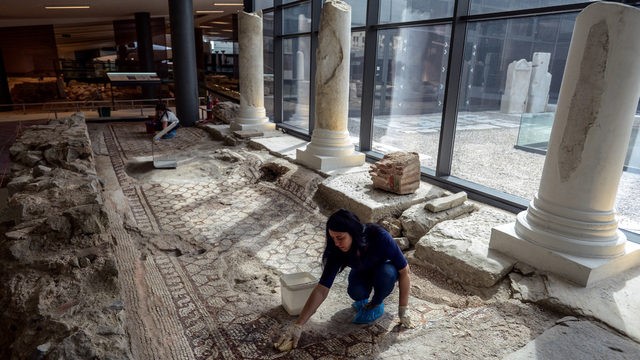 Basilica in the middle of streets and boulevards

The remains of the basilica were discovered during the construction of the road in the 80s, when a decision was made to change the route of the boulevard in order to bypass them. The first researcher of the site is Elena Kesyakova, she is the person who discovered the remains of the Bishop’s Basilica and began their research. Then, for years, there is a meadow on the site, under the surface of which are hidden centuries-old mosaics. The beginning of the idea for a museum for the Great Basilica came after the successful work on the Small Basilica, which is located nearby. “The small basilica was an abandoned site from the 90′s, left unguarded and unattended, visited by treasure hunters and children. It was in a bad condition … When we initiated the project, there were doubts whether we would manage at all, whether we would collect all the mosaics, whether it will be possible to build the ‘protective’ building. In the end, everything turned out well and the site began to function,” says Assoc. Prof. Elena Kantareva-Decheva. After the first attempt, the team and the America for Bulgaria Foundation gained the courage to work on the Great Basilica. Assoc. Prof. Kantareva has been in charge of the restoration team that works on the mosaics since 2015, and is now the Deputy Director of the municipal museum “Old Plovdiv”. She says that when the restorers set foot on the site in 2015, they were faced with the poor condition of the mosaics. “It was a grassy site, no one could have imagined that there were mosaics there. However, when we nudged the grass, we saw them,” she said. The team secures the mosaic so that it can be cleaned and separated from the field. The project has been delayed several times for various reasons, but perhaps one of the most important steps is the moment when in 2016 a “historic” decision is made, as Assoc. Prof. Kantareva calls it. Part of the basilica falls under the neighboring street and in order for the object to be revealed in its entirety, the road sleeve must be removed. “Plovdiv has a reflex to archeology,” said Stefan Stoyanov, Deputy Mayor at the Municipality of Plovdiv. Proof of this is the bold decision of the local authorities to remove the street so that the basilica can be studied in its entirety.

“The historical value of the place is important. In this place there was a temple of the imperial cult dating to around the first century,” said Lenko Lenkov, program director at the America for Bulgaria Foundation. Then the early Christian basilica appeared on the site of the previous buildings, and it was their “topographic successor”, as described by Dr. Stanislav Stanev from the Institute of Art Studies – Bulgarian Academy of Sciences.

Two layers of mosaic were found – one from the end of the 4th century and the other from around the beginning of the 6th century. At the entrance of the cultural center, visitors are greeted by a large and impressive image of a peacock – while throughout the monument they can see over 100 images of birds. They are a synecdoche for paradise and can be seen in the holiest part of the basilica – the presbytery.

In fact, scholarly research shows that this is specifically a Bishop’s Basilica. “There is a donation inscription, of which only a third has survived, situated almost in the middle of the lower mosaic floor in the south nave. Nikolai Sharankov, who is our epigraph, reads what is preserved from the inscription as follows:” [someone] made the mosaic during the time of Bishop []kian “. The name of the bishop during whom the mosaic was laid and on whose behalf the last four letters remain, he added as [Mar] kian or [Lu] kian and refers the writing to the second half or the end of the IV century “, says Dr. Stanev. A defensive building has now been built on the remains of the basilica, which has the function of protecting the mosaic and enabling the study of the basilica to continue. The building has two floors, and one layer of the mosaic has been moved to the top so that it can be seen in detail. The cultural center gives you the opportunity to understand what happened centuries ago – there are models of the building, as well as 3D glasses for a VR experience. There are also various workshops for visitors and a children’s interactive area.

The basilica will be open to visitors, but in reality its research continues. Archaeologists and restorers are expected to be there alongside the tourism staff. The Ministry of Culture participates by granting and financing 20 full-time positions.

Apart from being valuable as a historical monument, the project for the basilica is also a great example of public-private partnership. The Municipality of Plovdiv, the America for Bulgaria Foundation and the state, represented by the Ministry of Culture, are just part of the collaborators. The CEO of America for Bulgaria, Desislava Talyokova, says the partnership has a much broader dimension. It also attracts the private sector, which contributes with additional donations, such as the company EVN with over BGN 120,000 for the construction of a playground and a station for electric cars, and the purchase of glasses for augmented reality. “Ideal Standard” provides the sanitary equipment. The process involved a large number of people from the scientific community from various specialties (historians, epigraphs, restorers, etc.), as well as hundreds of volunteers involved in cleaning and removing tons of sand and soil from the protective coating of the mosaic. The suppliers and contractors of various elements of the site are about 50, and almost all are Bulgarian companies, said Desislava Talyokova. Involving so many countries in the process, as well as the long campaign to promote the site before it is opened – for example, exhibitions in different countries in Europe – is complicated, but could be much more effective than a standard European project, for example.

Centuries of life go on

One of the key effects of the project for the Bishop’s Basilica is expected to be educational – it can be used for practical work on site, as there are not many such places for specialists in Europe, and Stoyanov even mentions that there are opportunities for exchange under the Erasmus+ program. However, the economic potential of the site is of great importance, said Desislava Talyokova. “The purpose of this site is to impose a new tourist destination for the country. It is a site of world cultural heritage of the highest class, with the mosaics being most valuable. They give a lot of information about history and this period around IV – VI century, when Christianity was expanding,”Stoyanov said. “We can joke that Prague and Budapest have already been exhausted. That’s why a wave of curious people is coming to the East,” the Deputy Mayor added. Due to the pandemic, domestic tourism is dominating – Bulgarians are filling hotels, but the Basilica will be “advertised” to them as well. It is too early for a marketing strategy, but currently the main task is to promote it on the local market and then gradually abroad, Stoyanov further explained.

In addition, the Ministry of Culture has approved the Basilica for the UNESCO list. Although the Municipality of Plovdiv is taking over the management of the project, the Foundation will assist in the application for a UNESCO site. The application will be prepared in the future, as the monument must have functioned for at least a year, be socialized and managed successfully in order to be included in the official list, says Lenko Lenkov. In reality, Bulgaria has not included a new site in the List of World Cultural and Natural Heritage since the 1980s.

“The adventure of the basilica is only just beginning,” Lenkov concludes.